“If the stars should appear but one night every thousand years how we would marvel and stare.” – Ralph Waldo Emerson 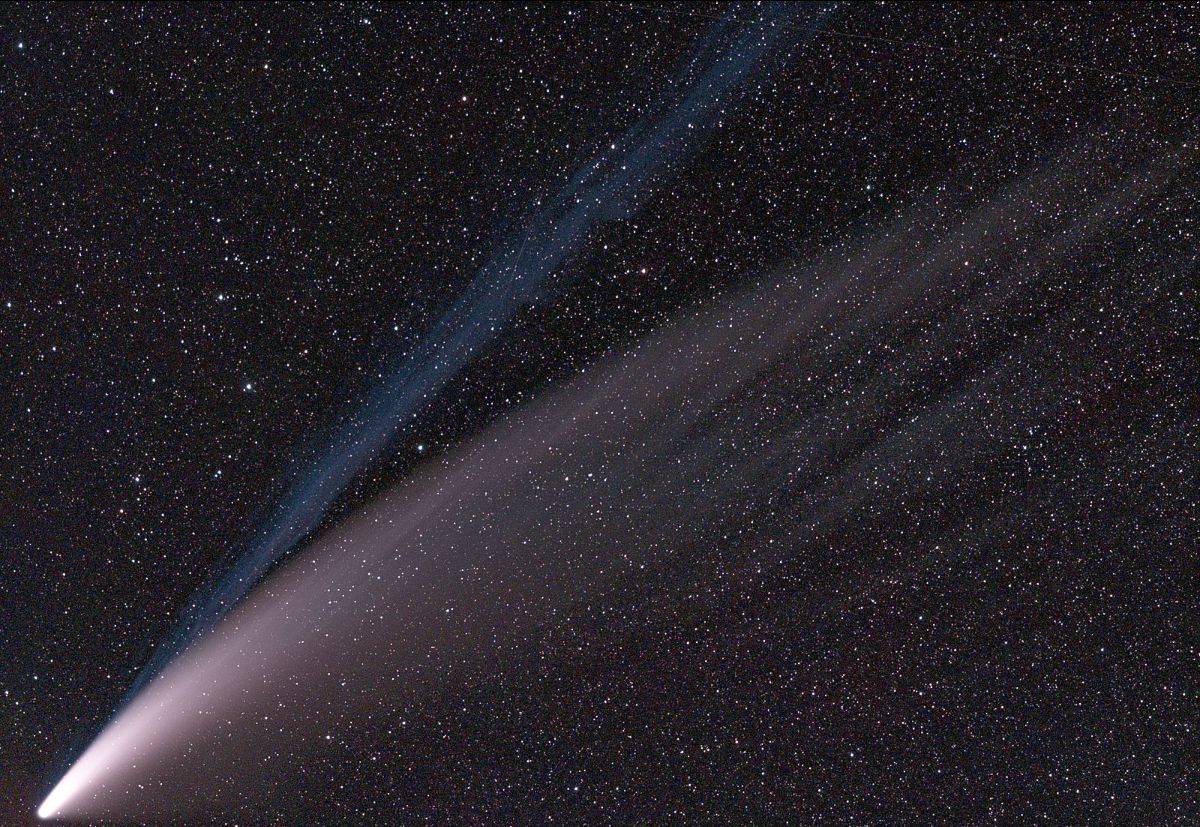 COMET!! Happening now in a sky near you! Credit: SimgDe

The brightest comet seen in 23 years has appeared in our night sky and it is awesome.

Our new visitor is Comet NEOWISE, named for a NASA space telescope that’s currently dedicated to searching for “near-Earth objects”. While the term “near Earth” might have you giving the sky some dinosaur-style side-eye, there’s no reason to be worried about this comet: it may be close by cosmic standards but it’s still about 70 million miles away!

It’s in no danger of hitting Earth, but it WILL be putting on a great show for stargazers over the next week! To see it, head outside about an hour and a half after sunset, right as it’s getting dark enough for stars to appear, and look to the northwest. Find the Big Dipper high in the northwest sky, and then follow the curve of its handle downward. The comet will be about halfway between the Big Dipper and the horizon, looking like a bright and slightly fuzzy star. 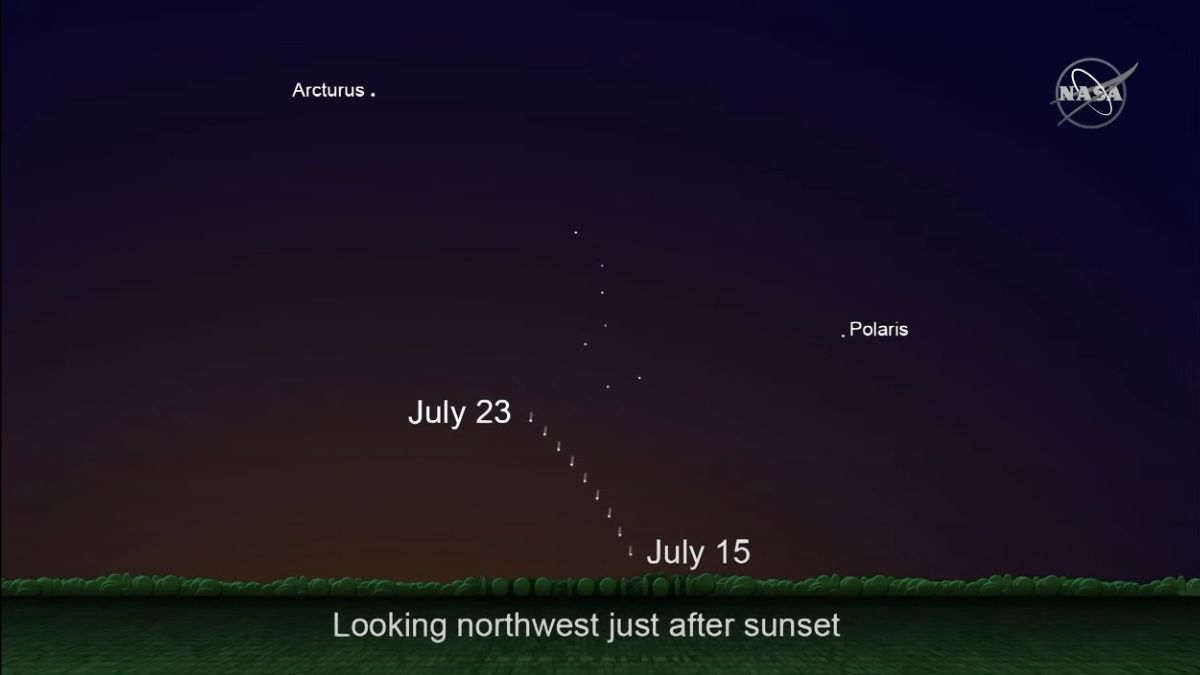 To get the best view try this on a good-weather night in the next few days, while the comet is at its brightest. You’ll want a pretty clear view towards the northwest horizon, without tall trees or buildings blocking the way. As always, dark skies are best but don’t let that discourage you – even if you’re in a city try to give it a shot from whatever shadowy spot you can find! I’m a big fan of binoculars as stargazing tools: if you have some you’ll get a fantastic view of our visitor, and photographers should be able to capture some gorgeous detail. That said, even with the naked eye you should be able to see the smudge of Comet NEOWISE’s tails, pointing away from the sun.

Yes, tails, plural. Comets are amalgams of rock, dust, ice, and frozen molecules that formed in the outer solar system and cruise around our sun in wide orbits. When a comet gets close to the sun, like Comet NEOWISE is now, its outer layers get fried and release dust particles. Those particles go streaming off the comet and away from the sun, reflecting sunlight as they go and forming the bright white curved tail that you’ll glimpse with the naked eye. However, there’s also a second dimmer tail that you might catch in dark-sky photos or with good binoculars: this one is narrow, straight, and blue-ish, thanks to light emitted by glowing charged particles as they blow off the comet’s surface.

Comets have a special place in my heart because they sparked my lifelong interest in astronomy. In The Last Stargazers I tell the story of another naked-eye comet that passed by Earth back in 1986: Halley’s Comet. I was barely old enough to look through a telescope at the time, but the sight of that comet absolutely thrilled me (very little has changed in the past 34 years: a couple nights ago found me pulling my husband outside at 10:30PM and jumping around our Seattle street in pajamas spouting highly scientific terminology like “LOOK AT THE FUZZY TAIL!”). 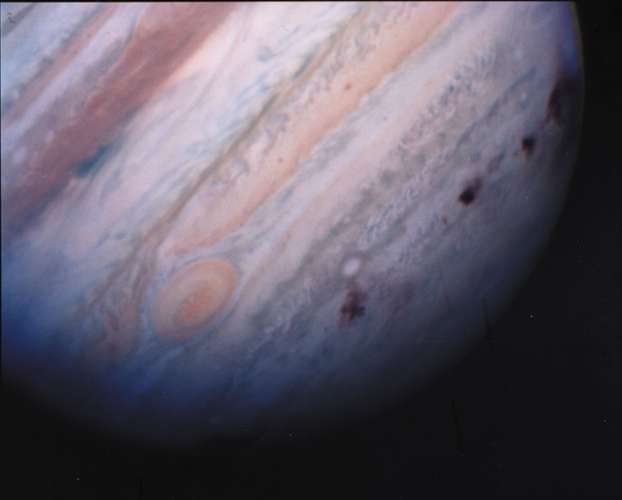 Bruises on the surface of Jupiter in 1994 after it was hit by Comet Shoemaker-Levy 9. Credit: NASA/Hubble

Eight years later, when Comet Shoemaker-Levy 9 struck Jupiter, I remember seeing the scars from the impact through our backyard telescope. I also remember watching a group of gleefully geeked-out astronomers on TV, crowded around a computer screen and cheering as they saw the first incredible Hubble observations of the impact. As a kid, those comets gave me my first glimpses of how amazing the night sky could be and of what it might be like to be one of those passionate and wildly-excited professional astronomers.

We’re starting to book “virtual tour” events for the August 4th release of The Last Stargazers! Things are coming together quickly, so keep an eye on the book’s Events page for immediate updates! I’ll also be sending around a round-up of events in a future newsletter. In the meantime, you can read past newsletter updates on the book’s website, follow me on my Goodreads and Amazon author pages, and read a Kindle excerpt of The Last Stargazers today!