How We Saw A Black Hole

“We have seen what we thought was unseeable.”
— Shep Doeleman, Astronomer 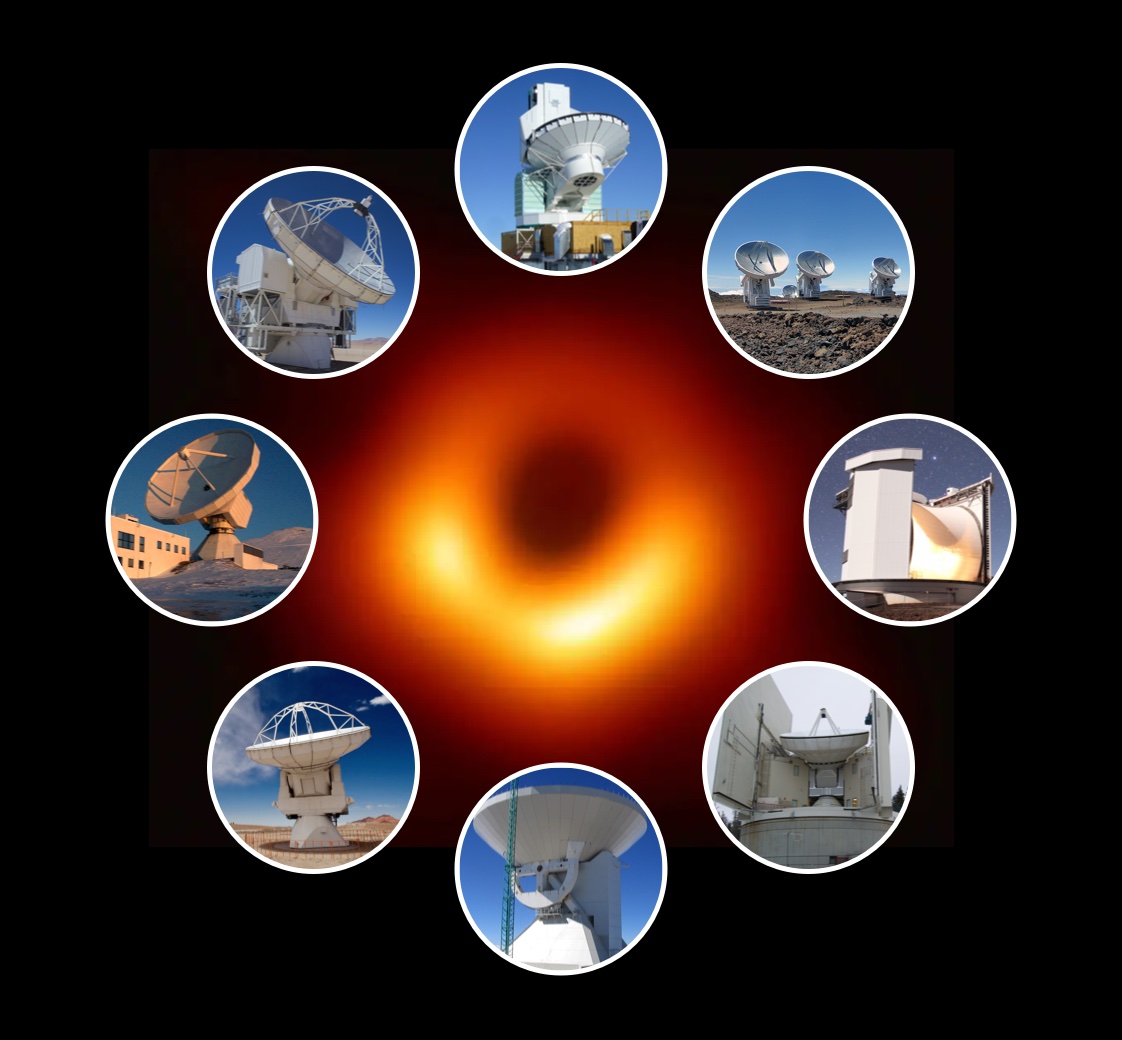 The eight observatories of the Event Horizon Telescope and [dramatic voice] the sharpest image in the world (no, seriously…)

This week we saw a picture of an invisible object taken by a mostly-invisible telescope.

You and I (and astronomers all over the world) have now seen, for the first time, the superheated matter and gravitationally-distorted shadow of a black hole 6.5 billion times as massive as the Sun in the heart of a galaxy 53 million light years away.

It…looks like a fuzzy glowing donut. Even as a deliriously excited astronomer, I can admit that. The image making headlines across the world this week may not have the pizzazz of a Hollywood special effect, but it still gives us goosebumps because it’s REAL. An artist didn’t draw this; the universe did.

And we photographed it using a telescope the size of our entire planet.

Book Thoughts: How We Saw A Black Hole

This black hole picture is the ultimate achievement of a super-telescope known as the Event Horizon Telescope, made up of eight radio observatories scattered across the face of the planet. Using a technique called radio interferometry, astronomers synchronized these observatories to turn the Earth into one giant radio telescope.

In radio interferometry, an array of telescopes in different locations will act like shiny spots spread across a giant virtual mirror. We can point those telescopes at the same object and record radio waves from that object at each location. We then send the data to a single facility that can computationally construct a final image. Larger distances between the telescopes give us a wider virtual mirror and a sharper final image, even though that distance is made up of empty space. It’s a pretty good deal: we get all the perks of a planet-sized telescope without the hassle of a Death-Star-scale construction project.

It’s easy enough to describe: point several different telescopes at the same thing, record the data, toss it into a computer, and voila, fuzzy donut. In reality, this one image was the culmination of more than a decade of work as two hundred people lugged cutting-edge telescope hardware to the ends of the earth, designed groundbreaking new image-processing algorithms, and desperately hoped for a few nights in April when the entire planet would have a good weather forecast.

To begin with, radio waves emitted by the superheated material around a black hole will bounce right off of water molecules in our atmosphere. This means to observe them we need to use telescopes built in some of the driest places in the world: the Atacama Desert in Chile, the summit of Mauna Kea in Hawaii, and the desert-like climate of the South Pole (dodging water vapor is also why we fly telescopes like SOFIA up to altitudes of 43,000 feet; you can read more about adventures on a flying telescope in past updates!)

The observatories of the Event Horizon Telescope array weren’t originally designed to work together – each one was built separately and spends most of its time operating as an independent observatory. It took years to retrofit each telescope with customized equipment so that they could all gather the same type of data. Each site in the array also has its own quirks and challenges. One telescope in Hawaii observes from under a Gore-Tex shroud to protect it from wind, blowing sand, and what the operators obliquely refer to as “birds” (birds pooping on the telescope are a famous scourge of radio astronomy). A Spanish telescope in the array is equipped with its own de-icing system so that it can quickly recover from mountain storms. Some observatories, like the Atacama Large Millimeter Array in Chile, are super-telescopes in their own right, interferometrically combining sixty-six individual telescopes to function as a single Event Horizon Telescope site. 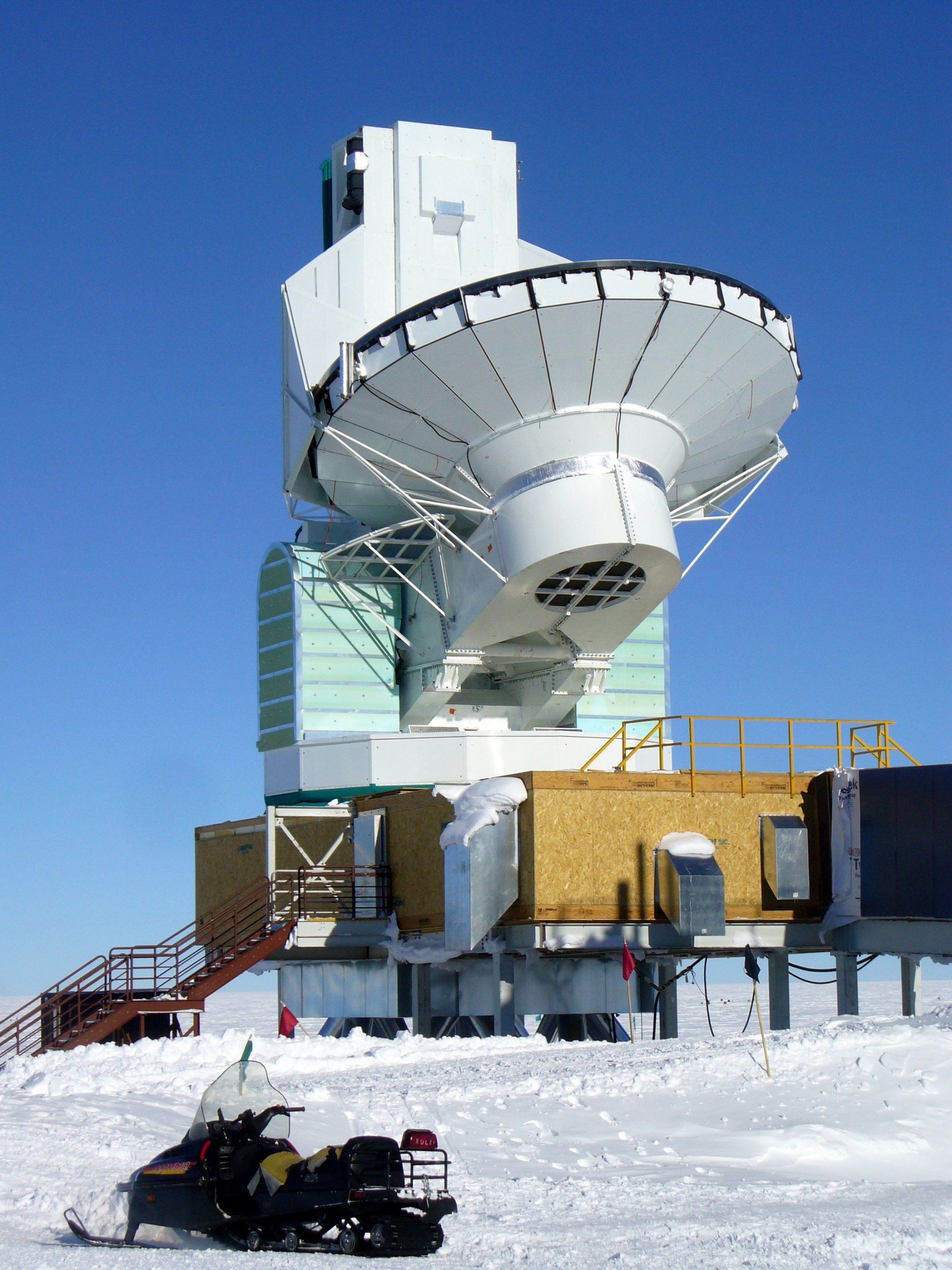 For interferometry to work we also need to know exactly when and where each piece of data is captured. This means equipping each telescope with an atomic clock and tracking its location with military-grade GPS. You’d think it would be fairly simple to keep track of where a large telescope is, but the observatories can’t even do us the favor of sitting still – Hawaii and Chile are famously earthquake-prone, and the South Pole telescope, pictured on the left, is built on the Antarctic ice sheet, which drifts more than thirty feet every year.

Observing the same target at the same time also means waiting for perfect weather at eight different sites around the globe. The Event Horizon telescope captured its black hole data over the course of five nights in April of 2017, with team members around the world waiting anxiously for a go/no-go decision every night. Thunderstorms in Mexico and windy weather in Arizona were enough to grind worldwide observations to a halt for two full days in the middle of the team’s work.

Finally, the data captured by these telescopes isn’t something that can just be passed along by email or uploaded to the cloud. Those five nights of observing generated fivepetabytes of data – that’s a 227-year-long Youtube video (Yule Log, anyone?) Processing the data from all eight sites meant shipping hard drives around the world. Even moving the drives is easier said than done – the April observations happened during Antarctic winter, when there are no flights to or from the continent, so the South Pole data had to wait until November before it could hitch a ride back to one of the team’s supercomputers.

All of this may seem like an absurd amount of work for one image, but this is just the first glimpse of what we can expect from the Event Horizon Telescope. The telescope is still being improved (they just added a ninth site in northern Greenland) and in the coming months and years we’ll be getting more seemingly-impossible data from some of the most mysterious objects in the universe. We just need to hope that planet-wide weather, birds in Hawaii, and Antarctic plane flights continue to cooperate!

I’ve finished reviewing transcripts from the 100+ interviews I’ve done for The Last Stargazers. I’m now on to consolidating the chaos of several hundred observing stories into chapters that reveal what it’s like to work at a job that sometimes sends you to the South Pole to photograph black holes.