“To confine our attention to terrestrial matters would be to limit the human spirit.” – Stephen Hawking 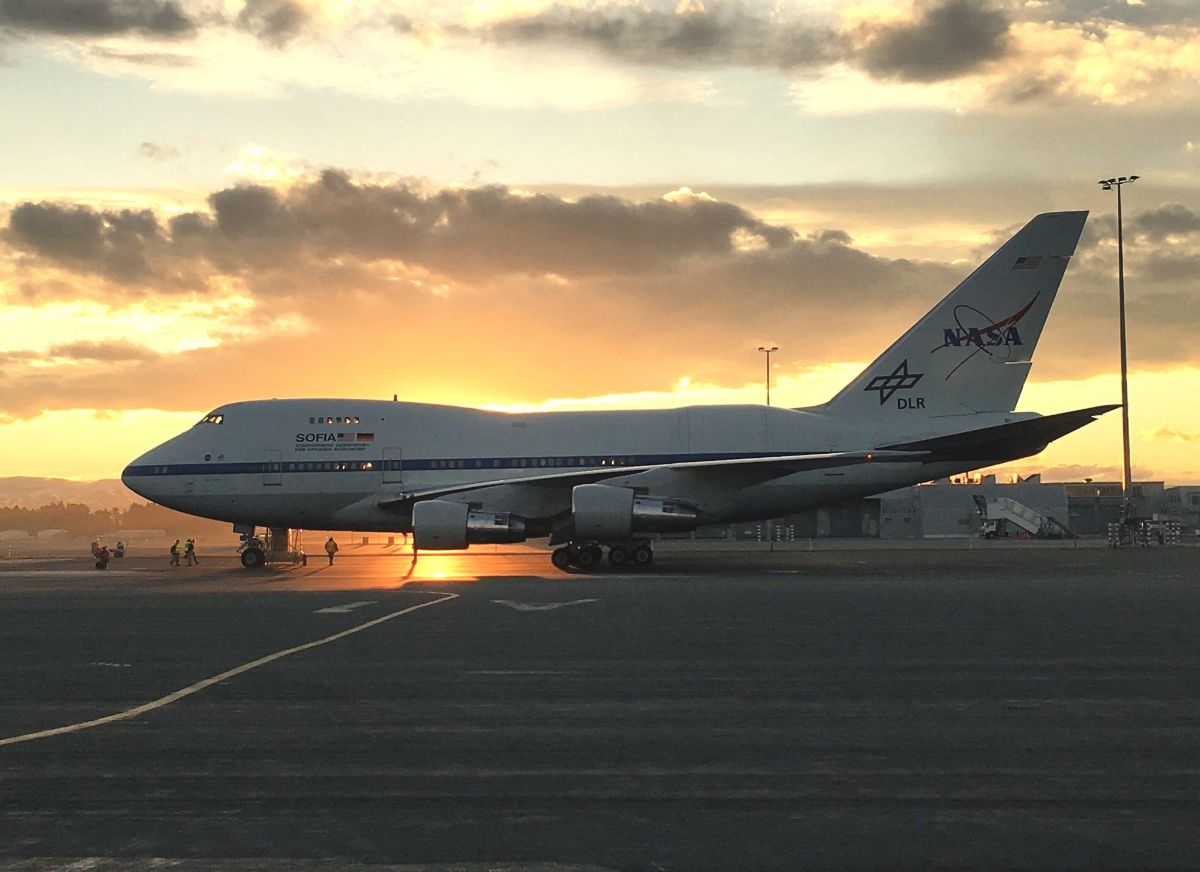 My ride on Monday night! Look closely to see the closed telescope chamber door in the back, just in front of the tail.

Book Thoughts: Flying with the Stratonauts

Last week I got to enjoy an experience that’s pretty rare even within astronomy – I spent my evening flying high above the Antarctic Ocean as an observer on the SOFIA airborne observatory! I was originally supposed to fly on SOFIA back in February as part of my research for The Last Stargazers but the flights were canceled due to a rare combination of weather and mechanical difficulties. This week I returned to SOFIA to ride with the telescope as it observed a massive dying star for one of my research projects. In July, this meant flying down to Christchurch, New Zealand for the observatory’s series of observations during winter in the southern hemisphere.

There are some fascinating quirks to observing from an airplane! The flight was just under ten hours and followed a very precise pre-planned path dictated by the observations. The telescope is built inside a chamber in the back of the telescope and can’t turn very far to the left or right without pointing at the inside of the plane (just like a person peering out the window during a flight), so if we want to point it at something in the sky the entire plane has to turn! Our observing plan for the evening sent us swooping down towards the Antarctic Circle and then back, observing the center of our Milky Way (only visible from the southern hemisphere because of how our planet is tilted!), the remnant of a nearby supernova, and a dying star. During the flights a solid half-dozen people on the plane were in charge of keeping the telescope and the instrument working perfectly, while the pilots kept each leg and turn of the flight on schedule to within a matter of seconds (wouldn’t it be great if all flights were this timely?) 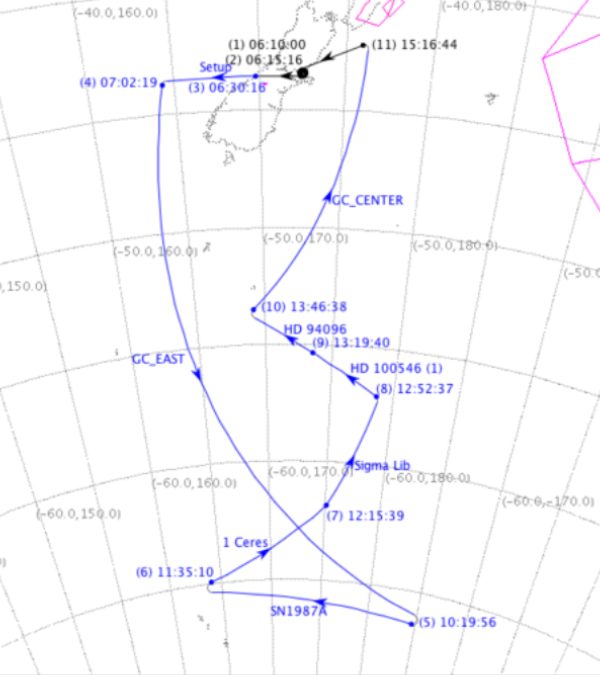 Our wacky flight path, from Christchurch down towards the South Pole and back!

The impeccable schedule isn’t the only thing that sets SOFIA apart from a commercial plane. Some aspects are unarguably cool: as the first-time flyer on this trip I got to sit in the 747-SP’s cockpit when we took off from Christchurch International Airport! Apart from take-off and landing we were also all free to move around the plane the whole time, even when we hit a little turbulence (which the telescope glided through perfectly thanks to being mounted on the world’s largest ball bearing, nearly 4 feet in diameter). On the other hand, without the insulation of seats and carpeted walls and other trappings of commercial travel, the cabin was LOUD – everyone wore either earplugs or communication headsets for the duration of the flight to protect their hearing and keep conversations audible. The cabin is also kept pretty cold to help prevent the telescope instruments from heating up and having problems, so everyone was pretty bundled up. 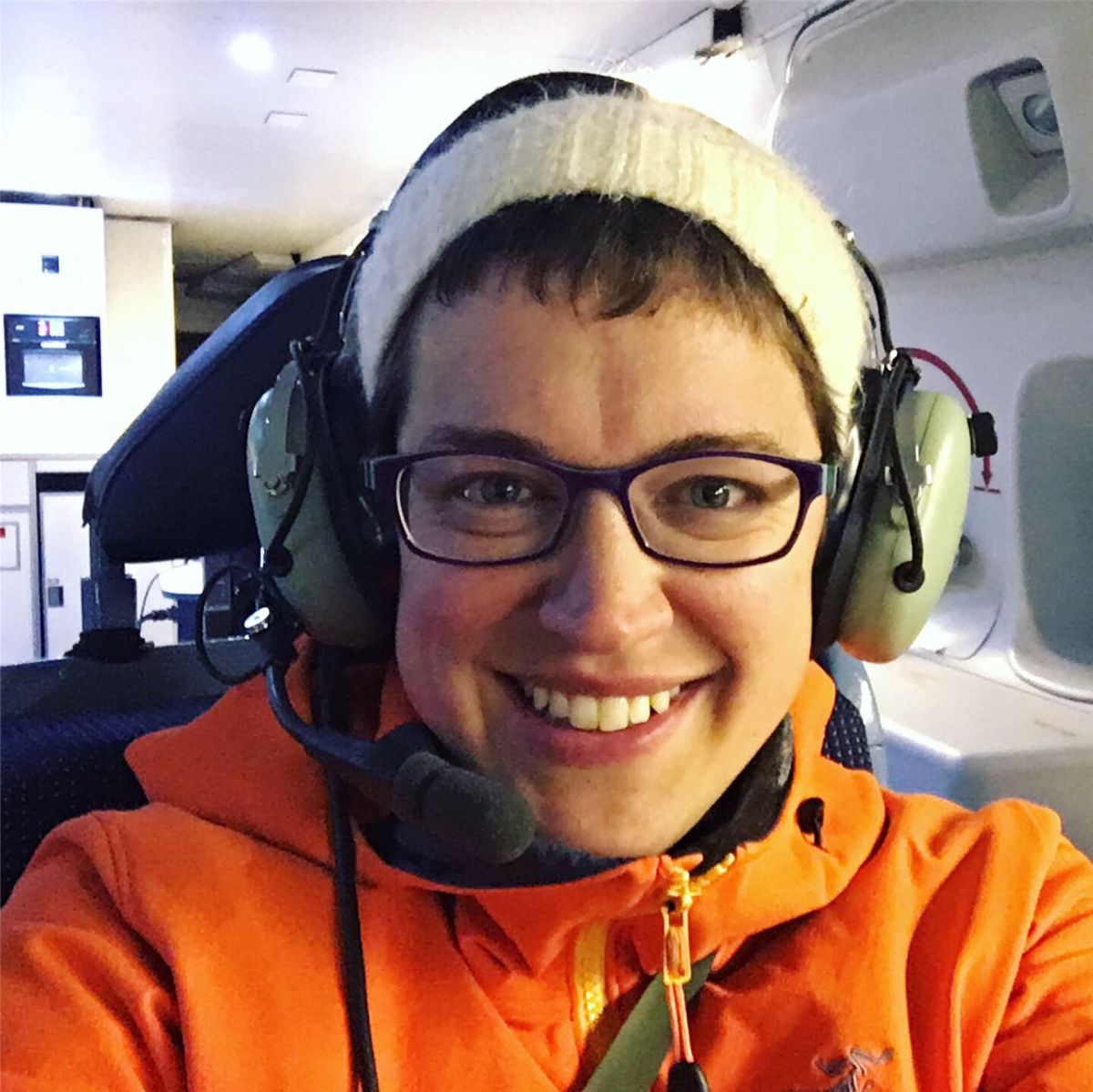 Just after observing one of my stars with SOFIA: cold, half-deaf, sleep-deprived, and psyched.

Other quirks remind you that SOFIA is, in fact, an experimental aircraft with a hole in the side. We went through a special safety briefly before the flight and learned all of the creative ways that we might want to exit the aircraft (my favorite by far was the hatch in the cockpit that’s equipped with handles and rappelling wires; you grip a handle, hop out, and then get lowered to the ground). An engineer works in the cockpit alongside the pilots, helping to monitor extra components of the plane like the giant door that keeps the telescope chamber sealed (although the door is so well-built that you don’t feel a thing when it opens and closes mid-flight!) While in flight we were also all required to carry little emergency packets everywhere we went, which could be unfolded and deployed into a full oxygen hood system if needed. 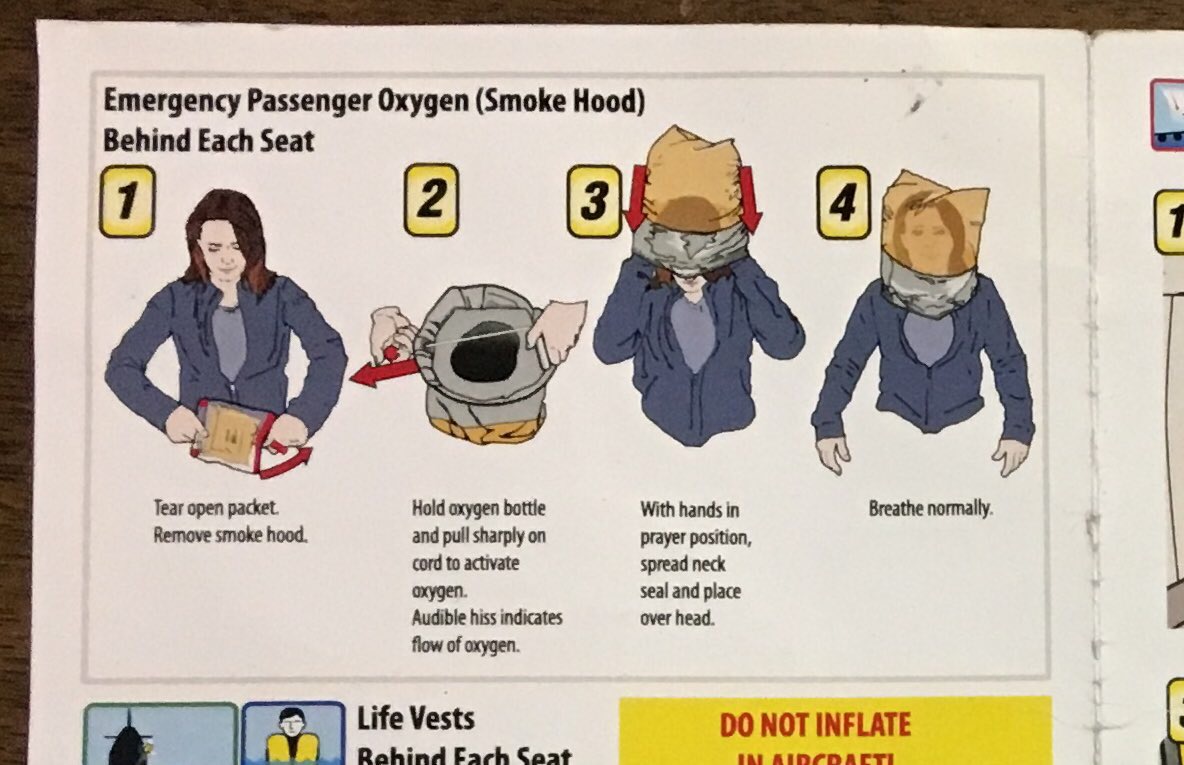 From the SOFIA flight safety cards. I’m sure I will calmly execute these instructions in a situation where I suddenly need emergency oxygen. #breathenormally

Our particular flight also went so far south that we were pretty much the only plane flying in that entire part of the planet, since there are almost no flights to Antarctica during the winter months. On some flights like this it’s possible to see the coast of Antarctica itself shining under a full moon. We didn’t have a full moon on our flight, but while this meant we missed Antarctica we caught something even better. Brilliant green southern aurora lit up the sky during the entire southern-most stretch of our flight!

Even with so many incredible new experiences, the whole flight felt surprisingly similar to observing on the ground in some ways! We all combined excitement over our observations with quiet stretches when someone else was working, chatted over microwaved night lunches, kept ourselves fueled with coffee, and chugged water to keep ourselves hydrated – we just did it all at 43,000 feet!

Someone told me before my flight that people who fly on SOFIA can legitimately dub themselves “stratonauts”. It took months of scientific and logistical planning, but I’m so happy that I finally got to join the ranks of the stratonauts on what has to be one of the most incredible observing adventures in astronomy!

Exciting news: I’ll be a featured speaker at this year’s GeekGirlCon in Seattle on Nov 16-17! Come to my presentation panel and Q&A to hear about the science and story-telling power of astronomy in sci-fi and fantasy and its connections with the real-life astronomy adventures that I write about in The Last Stargazers. This will be the first of several pre-publication appearances that I’ll be making to talk about the book in the run-up to its 2020 pub date. As more plans are finalized I’ll continue to share updates here first!