“Space isn’t remote at all. It’s only an hour’s drive away if your car could go straight upwards.” – Sir Fred Hoyle, Astronomer 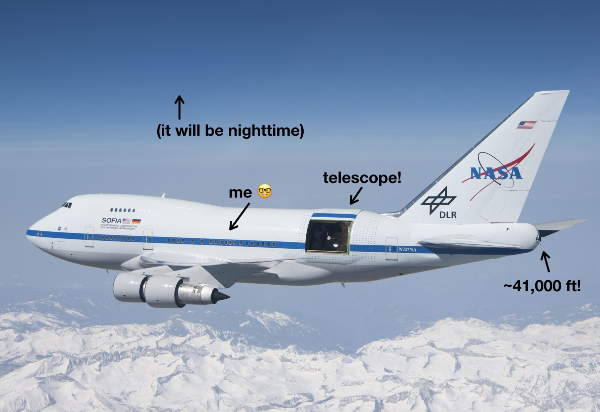 Astronomers have always pushed the limits of physics and engineering (and sanity) in pursuit of the darkest and clearest skies in the world. We’ve built telescopes high in the remote Atacama Desert in Chile and a stone’s throw from the South Pole in Antarctica. Some astronomers even use weather balloons or low-altitude rocket flights to temporarily fling their telescopes as close to space as they can.

I’m excited to share that this week I’ll be flying with one of these extreme telescopes, the Stratospheric Observatory For Infrared Astronomy (SOFIA). SOFIA is a telescope built in the back of a specialized Boeing 747 that’s been designed to fly in the Earth’s stratosphere at 38,000-45,000 feet with a door open! At this altitude we’re above 99% of the water vapor in our atmosphere, which blocks the longer wavelengths of infrared light from reaching the ground. By flying a telescope to these heights we can observe things like the birth of stars and planets, complex molecules in nebulae, mass being shed from dying stars, and supermassive black holes.

Any telescope is complex, but an airborne observatory is on a different plane (ha) altogether. Turbulence is a challenge on any flight: on SOFIA the telescope is specially stabilized and mounted on the world’s biggest ball bearing (nearly 4 feet in diameter). The plane itself will get pretty cold during the night and we’ll be carrying an infrared camera that’s magnetically cooled to a temperature of almost absolute zero! We’ll also be tracing out a complex flight pattern above the western US to capture the telescope’s science targets over the course of a 10-hour flight through the stratosphere.

I’ll be tweeting about the trip over the coming week! Follow #EmilyFliesSOFIA for updates as I head down to SOFIA’s home in Palmdale, CA, go through emergency egress training, and then actually fly on Wednesday or Thursday night! There’s no wifi on board so I won’t be able to live-tweet the flight itself, but I’ll have plenty to share after the fact. I’ll also be taking photos and videos on board and will share them here first – look for them in next week’s newsletter!

In addition to flying aboard SOFIA myself I’ll be interviewing other astronomers along with crew members and pilots about their experiences working with an airborne observatory. Once I’m home I’ll be back to work on distilling these interviews and my own stories and research into book form and watching The Last Stargazers continue to come together. In other book news, I’ve also got my Goodreads and Amazon author pages up and running – check them out!