“The polished flawless pool that it must be / To hold the perfect image of a star.” – poet Alfred Noyes, The Observatory 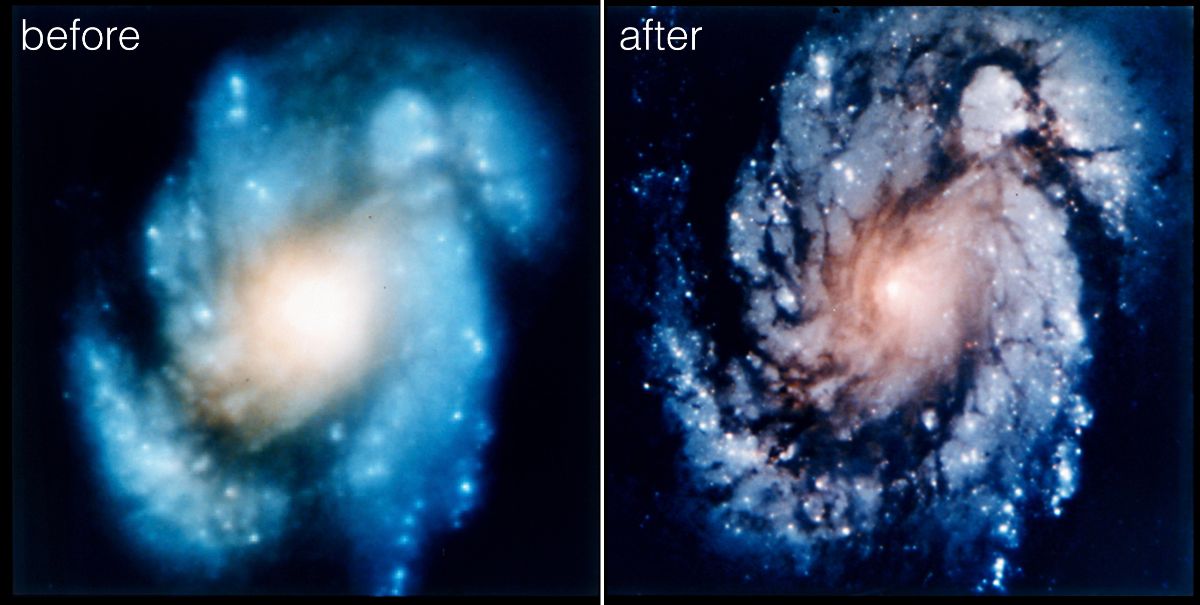 #NailedIt: the Hubble Space Telescope’s view of the M100 galaxy, before and after correcting a 1/10,000th-of-an-inch error in the shape of its mirror. Credit: NASA

The Hubble Space Telescope launched with a mirror that was out of focus. People were aghast that NASA would ever let such an egregious mistake get past them, but in truth the scale of the problem was tiny. The entire surface of a telescope’s primary mirror needs to be perfectly curved in order for the light it collects to be properly focused, and I do mean perfectly. The mistake that threw Hubble so dramatically out of focus boiled down to the edge of the primary 8-foot mirror being too flat…by about 1/10,000th of an inch.

This need for extreme precision is a consequence of physics: for any telescope mirror to properly reflect and focus light, its shape needs to be perfect to within 5% of the wavelength, or “width”, of the light it’s focusing. Hubble observes the same light we see with our eyes, which has a relatively narrow wavelength (around 1/50,000th of an inch). On this scale, even a seemingly minuscule error in a mirror’s curvature can be enough to wreak havoc on what we hope will be a gorgeous picture of the universe. To fix Hubble, NASA ultimately launched a repair mission that essentially put glasses on the telescope, installing a series of additional (and very carefully tested) mirrors to correct for the primary’s malformed shape. 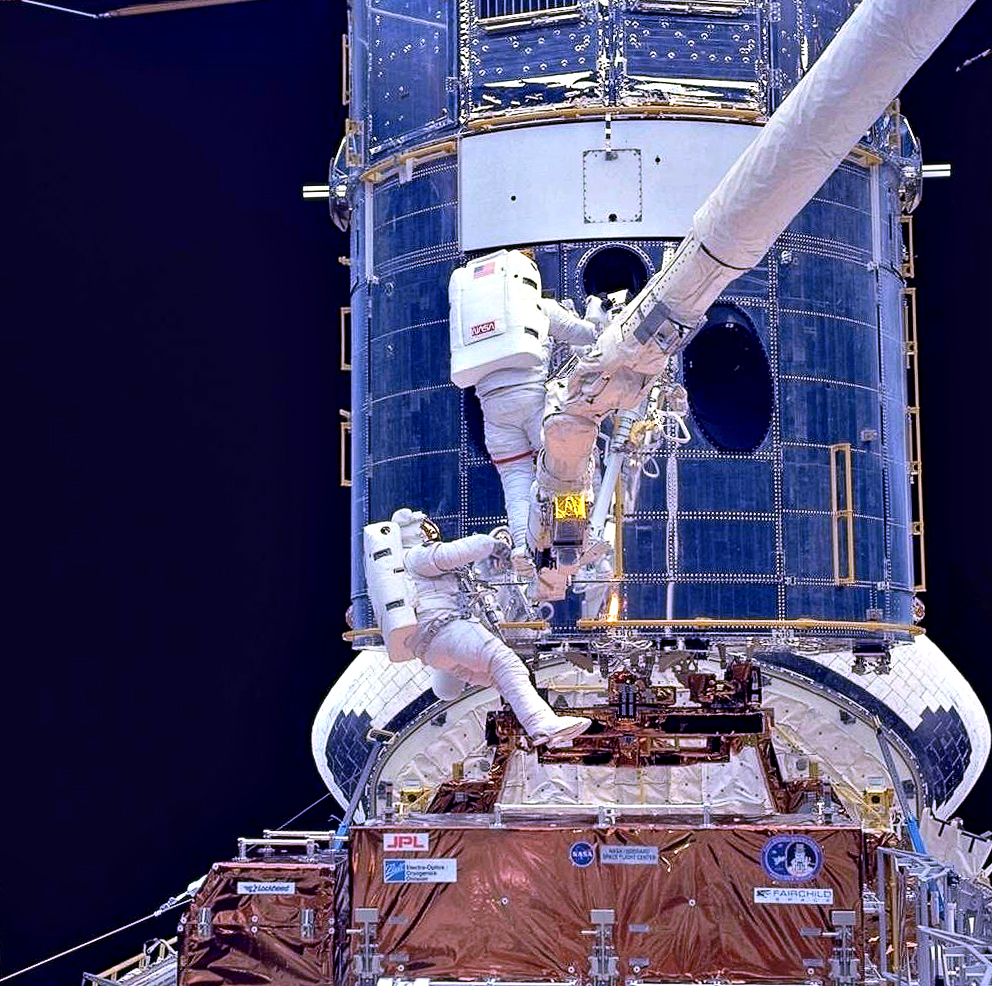 “WHICH LOOKS BETTER, HOUSTON, A OR B?” Astronauts Story Musgrave and Jeff Hoffman making an optometry house call to Hubble in 1993.

With so little room for mistakes, giant telescope mirrors have become the pampered prima donnas of our observatories. Creating, transporting, and maintaining them is a laborious process. Today’s mirrors are made of literal tons of solid glass, melted and cast in enormous spinning furnaces so that they settle into a perfectly curved shape. The glass is then painstakingly polished to within the width of a human hair and coated with a thin layer of aluminum to make it reflective.

Once complete, these beasts need to be transported to the remote mountaintops where they’ll be living. The mirrors are sealed in customized packing crates filled with shock absorbers and insulation, loaded gently onto trucks, driven up bumpy mountain roads at a snail’s pace to avoid any jostling, and – in the final hair-raising step – hoisted high into the air over the dome by a crane before being lowered into the waiting telescope support structure. 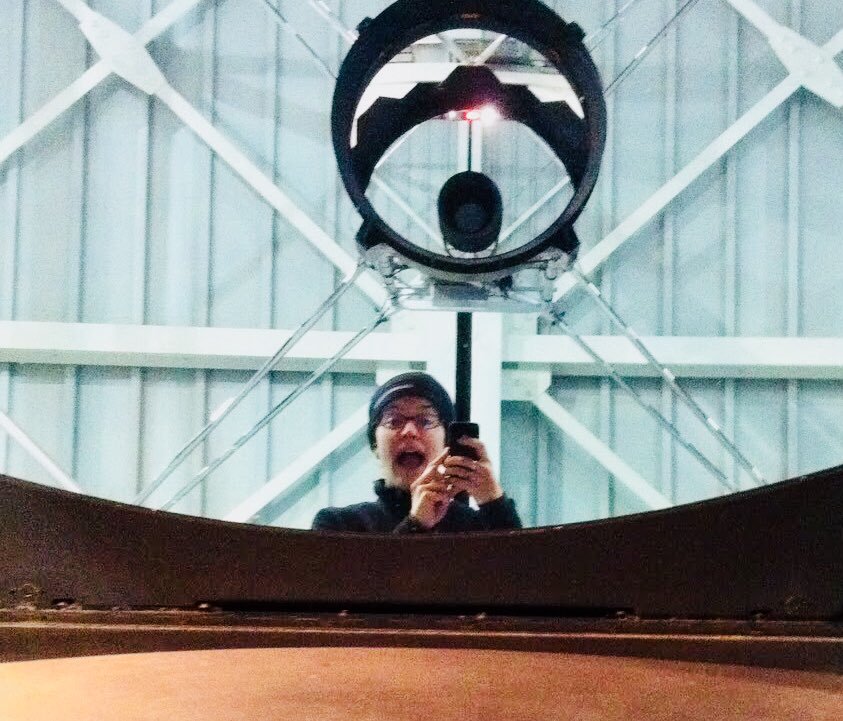 Mirror in place! My reflection in the 11.5-foot mirror at Apache Point Observatory.

After an observatory is up and running its mirrors are still scrupulously protected. Whenever there’s a risk of rain or high humidity telescope domes are closed up (and science is put on hold) in order to avoid damaging the mirror’s reflective coating. High winds will also prompt closures to prevent damage to the mirror from blowing dust, sand, or snow. The mirrors are also regularly removed to be cleaned and receive a fresh coat of aluminum. Each of these removals involves another precarious lift and another episode of everyone holding their breath and wondering how much bad luck you earn if you drop and break a mirror the size of a car.

We can be a little less careful when it comes to radio telescopes. Radio dishes may not look like mirrors but the concept is the same – they’re simply reflecting radio light, which has a much longer wavelength than visible! This means that a surface that’s reflective in the radio just looks like a regular sheet of metal to our eyes, and that the necessary precision is bit more forgiving. Radio dishes only require perfection to within an inch or two. When I worked at the Very Large Array radio observatory (yes, the same one Jodie Foster used to discover aliens in Contact) I learned that you can even get away with (carefully) climbing and walking on some radio telescopes! If you walked on one of the visible-light glass telescopes, the mirror makers would probably chuck you off the top of the dome. 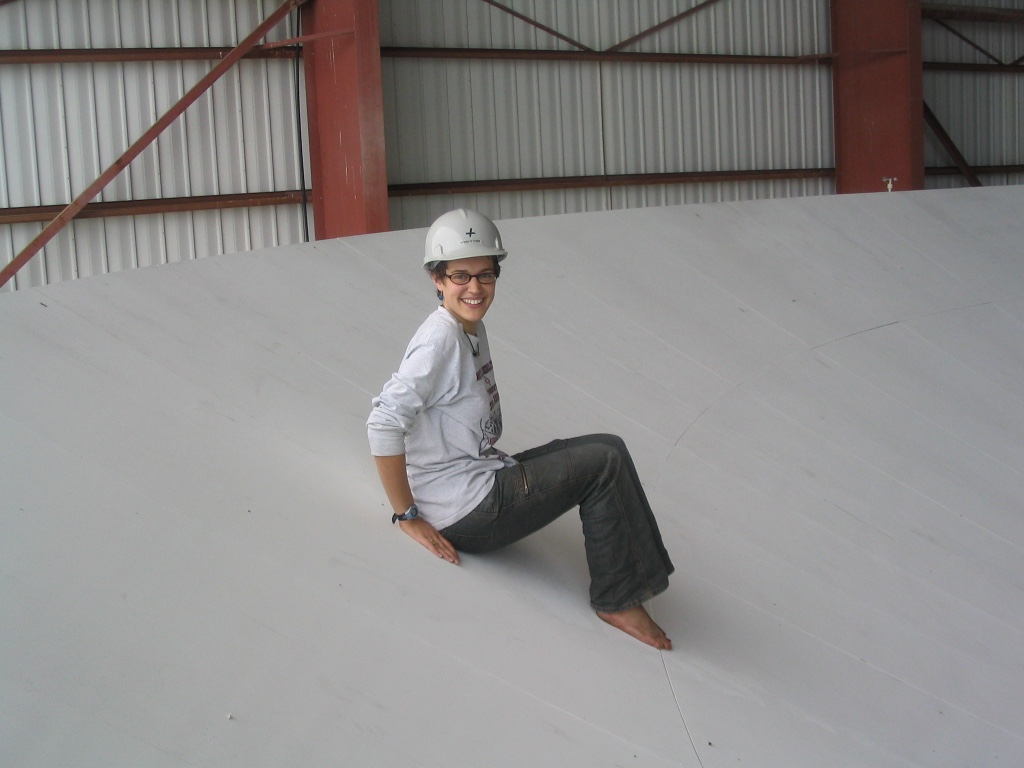 Don’t try this on a mirror: perched atop one of the dishes of the Very Large Array radio observatory in New Mexico.

That said, those glass mirrors can also be surprisingly robust in their own way. The Subaru Telescope’s 8.2-meter mirror got covered in what was essentially bright orange antifreeze one morning after a camera mounted high over the mirror began to leak. Another observatory had liquid mercury leak onto a mirror and strip away the aluminum coating (prompting a re-coating of the mirror, a very thorough clean-up job, and a visit from OSHA). Perhaps most infamously, one telescope mirror has even survived being shot, but that’s a story for another time… or a book 😉

I’ve got some exciting astronomy adventure news: after two cancelled flights on SOFIA back in February I’ve gotten another chance to fly on this spectacular airborne observatory! Next week I’ll be heading down to Christchurch, New Zealand, where SOFIA operates during the southern winter. If all goes well we should fly on July 1st, soaring below the Antarctic Circle and observing infrared light from cold massive stars that I’ll be using to study how stars die as supernovae.

For now I’m in France for a conference and a couple final interviews for The Last Stargazers. There are some LONG flights between here and New Zealand, but once the trip is underway I’ll be using the #EmilyFliesSOFIA hashtag again for those who want to follow along on Twitter or Instagram!