Houston, The Telescope Has Landed

“Time on the moon was so precious, what I remember most is trying to catch up.” – John Young, astronaut/astronomer 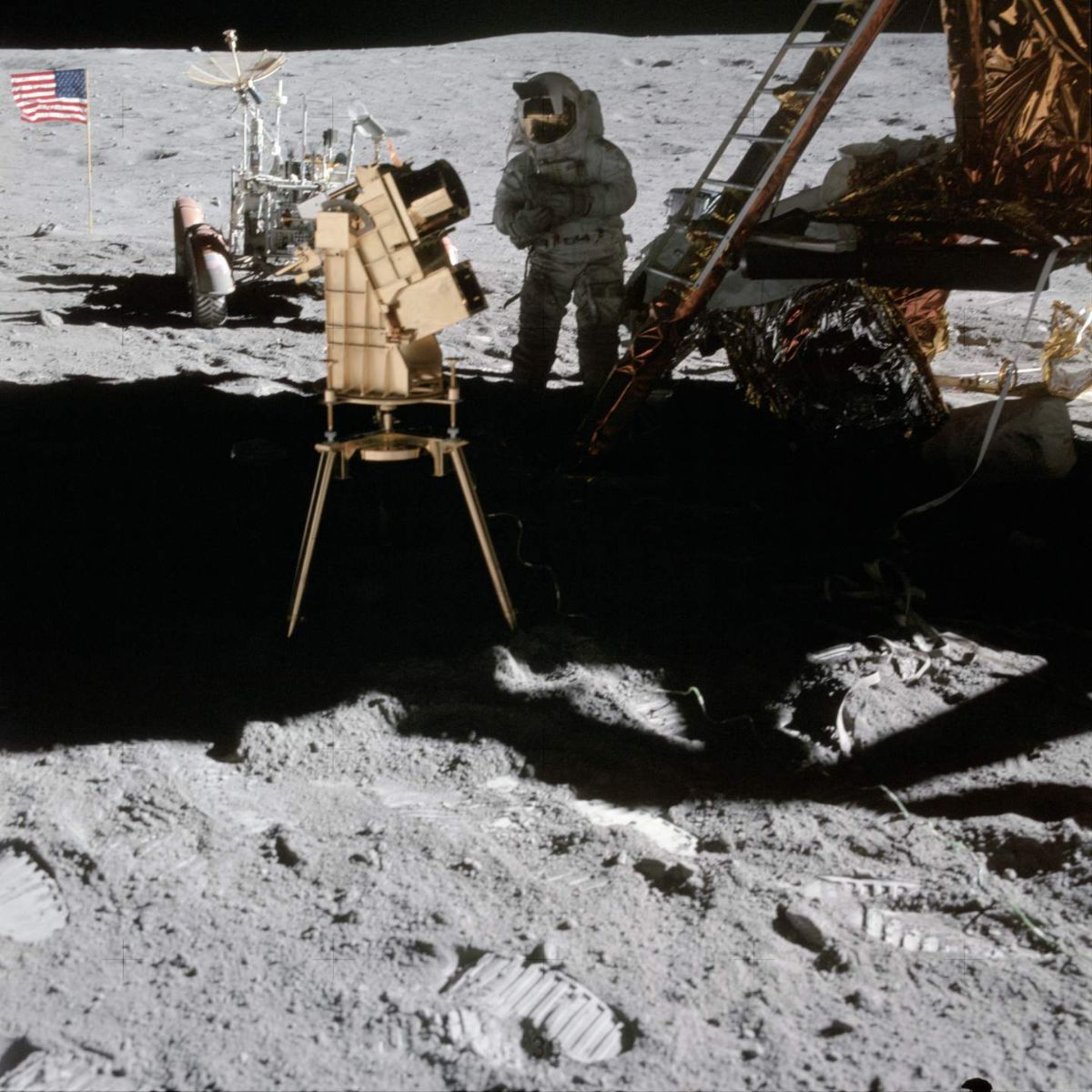 Telescope used on the moon by John Young, the only observer who never had to worry about clouds. Credit: NASA

Today is the 50th anniversary of the Apollo 11 moon landing! Neil Armstrong and Buzz Aldrin’s landing brought the attention of the entire planet skyward as they took their first steps on a new world. NASA went on to send ten more astronauts to the surface of the moon over the next few years. It was an incredible time for crewed space exploration.

Astronomy research also gained a few firsts thanks to the Apollo missions! During Apollo 11 Neil and Buzz placed a special mirror on the lunar surface, designed to reflect lasers shot at the moon by telescopes. This means that we can directly measure the distance between the Earth and Moon to within a few millimeters (we learned from this that the moon is actually spiraling away from us at a rate of 3.8cm per year!) Apollo 14 and 15 added more mirrors during their missions, and observatories around the world are still carrying out lunar laser experiments today. 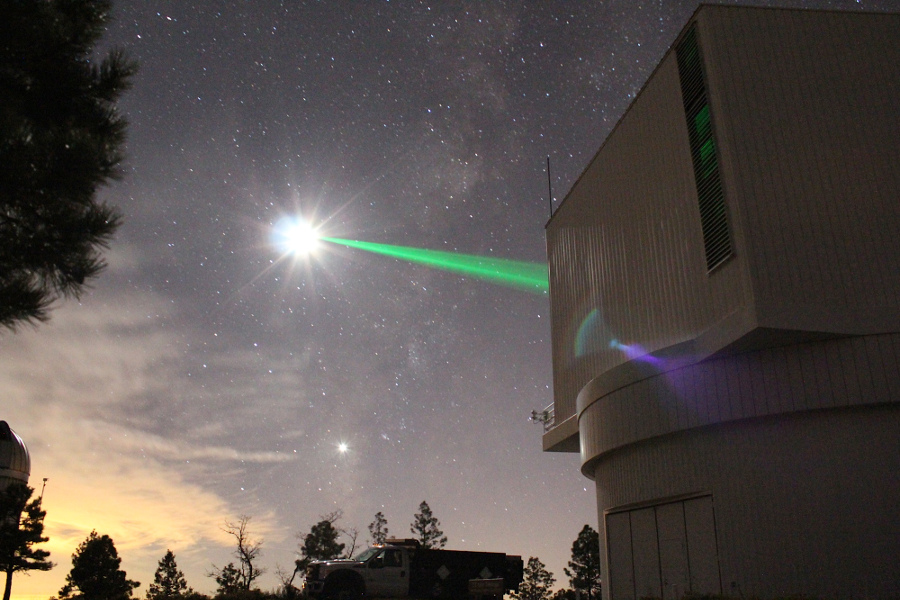 A  telescope at Apache Point Observatory bouncing a laser off the moon (and, presumably, an observer making Star Wars lightsaber noises under their breath).Credit: Jake Turner.

Apollo 16 brought a small telescope to the moon in 1972! Astronauts John Young and Charlie Duke placed a 3-inch telescope in the shadow of their lunar lander to keep it cool and out of the sun. The telescope used photographic film to capture ultraviolet light (which is blocked by our planet’s atmosphere and can’t be observed on Earth) from newborn stars in clusters and nebulae as well as one of our neighboring galaxies, the Large Magellanic Clouds.

Apollo 16’s telescope ran into a few unexpected problems. The cable lines connecting the telescope to its battery kept getting tangled up in the astronauts’ legs, and the battery itself had to be left in the sun to keep it warm. In the cold lunar temperatures the lubricant that was meant to make the telescope easy to spin also started to freeze up, making it increasingly difficult for the astronauts to turn and point the telescope. Eventually they were all but arm-wrestling the thing to get it to turn and then digging it out of the lunar dust to re-level it after each move, taking up valuable time and oxygen.

Still, the first astronomical observations from the moon proved to be worth it! The Apollo 16 telescope detected the first direct evidence of intergalactic hydrogen and the first ultraviolet observations of extremely hot young stars in another galaxy. Today we use data like this to help explain how the first stars and galaxies in the universe may have formed. 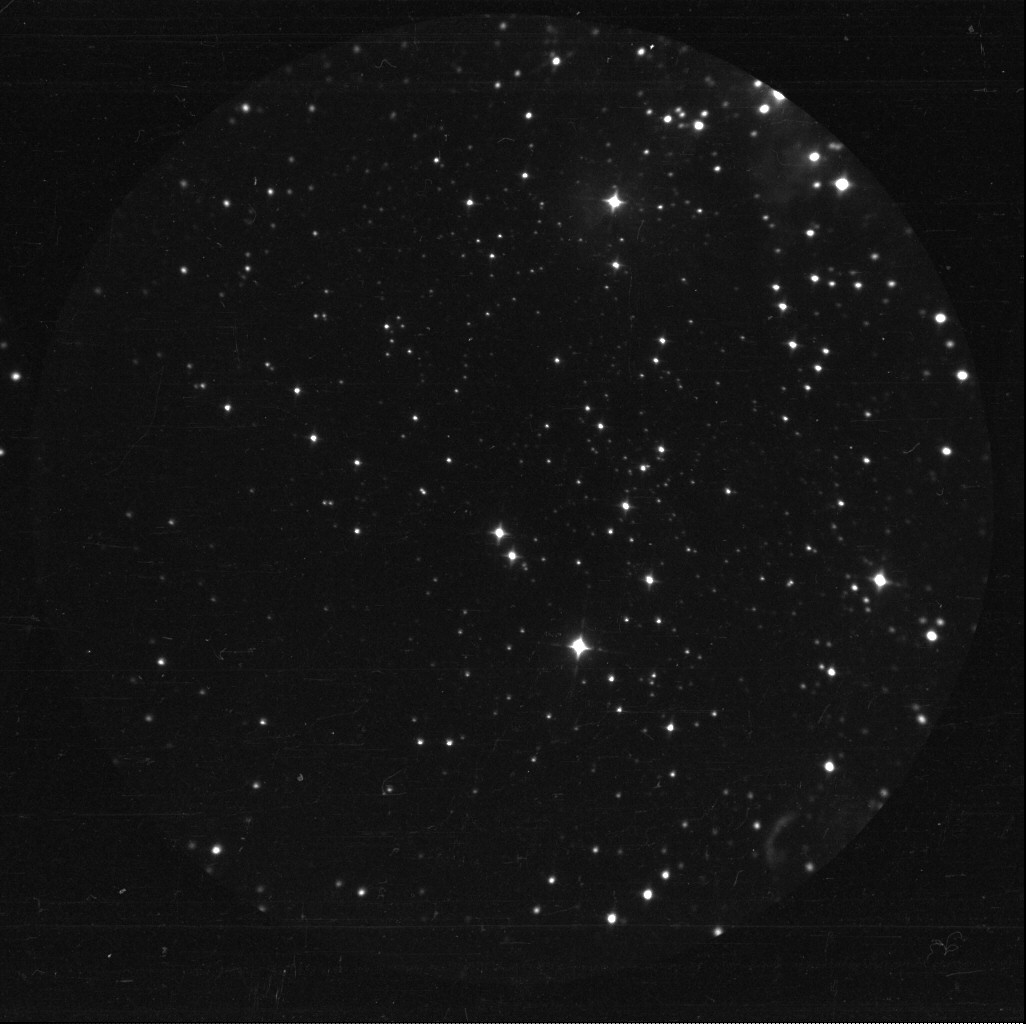 Astrophotograph of the ultraviolet light from a field of stars, taken from the surface of the moon. Credit: NASA

The advances we made in spaceflight during our race to the moon – docking two spacecrafts in orbit, learning what astronauts need to work for hours in the vacuum of space –  also directly led to the successful launch (and repair!) of the Hubble Space Telescope. The moon also factors prominently into our future space telescope plans – the James Webb Space Telescope, scheduled to launch in 2021, will be placed behind the moon to protect it from the light and heat of our Sun so that it can capture faint infrared light from the other side of the universe. All of this amazing space-based astronomy can be traced back to that first moon landing and the dedication of the 400,000 astronauts, scientists, engineers, and support staff around the world that made our dreams of exploring the universe a reality.

I recently got my first glimpse of the book’s cover art, which is spectacular – the artists working with my publisher, Sourcebooks, have done an incredible job! We’re polishing up the last few details, but as soon as it’s done I’ll be sharing the final cover design in a future update! In the meantime, I’m in the home stretch of writing as I start wrapping up the book.