“This is the fate that often awaits awaits astronomers…to be the spectator of a fatal cloud.” – Guillaume Le Gentil, astronomer 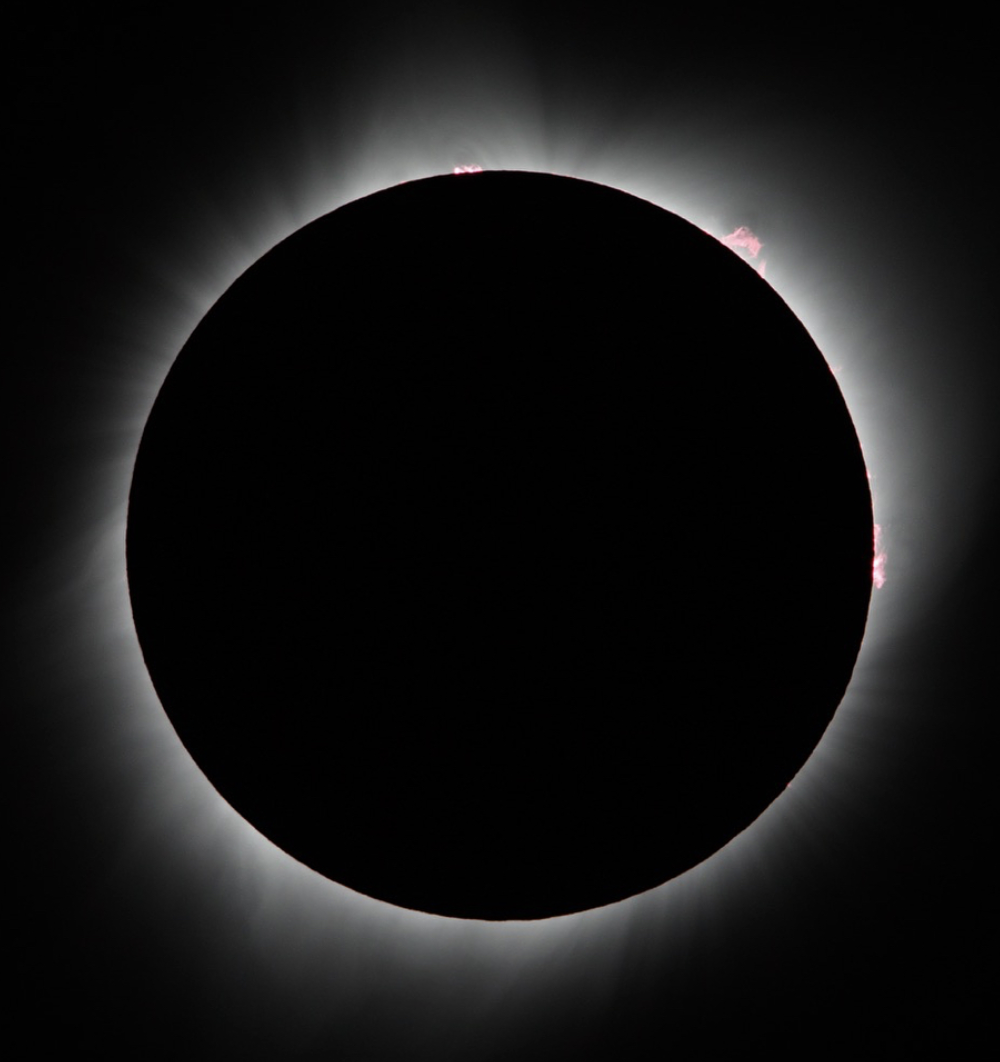 Photo of totality during the 2017 solar eclipse. No astronomers were declared dead during the taking of this photo.

Eclipses are some of the toughest but most rewarding events to observe in astronomy. Seeing the moon block out Sun gives us a great opportunity to study everything from the Sun itself to complex theories of gravity and spacetime. Observing Venus passing in front of the Sun helps us learn more about Venus’s atmosphere and how to identify planets around other stars. Planets and asteroids in our solar system will even sometimes pass briefly in front of stars, giving us a few fleeting moments to study how the star’s light changes and suss out new information about planet atmospheres, asteroid shapes, and how our solar system works.

Still, observing eclipses can be a herculean undertaking. Any eclipse – whether it’s the moon passing in front of the sun or a tiny asteroid momentarily blocking light from a star – is effectively casting its “shadow” on the Earth, and that shadow only covers a part of our planet. This means that, unless we get terrifically lucky and have a world-class telescope in precisely the right place, observers have to travel to the shadow. This is why so many people flocked to that narrow strip of the United States stretching from Oregon down to South Carolina in 2017 to catch the last total solar eclipse: that eclipse “path” marked the shadow cast by the moon on the Earth.

Eclipse observations have led to some of the most spectacular adventures ever carried out in the name of astronomy. One hundred years ago, in 1919, Arthur Eddington mounted an expedition to capture a solar eclipse and test Einstein’s theory of general relativity. According to Einstein, the Sun should “lens” background stars as it passes in front of them, bending their light thanks to the effects of the Sun’s gravity on spacetime and causing them to appear at a slightly different place in the sky. The problem with testing this theory is that normally the Sun is so bright that it outshines the light of any other stars in the sky! A eclipse would solve this, handily blocking the Sun and allowing Eddington to measure the position of nearby stars. He just needed to pack up the cutting-edge astronomical equipment of 1919 and get into the path of the eclipse. 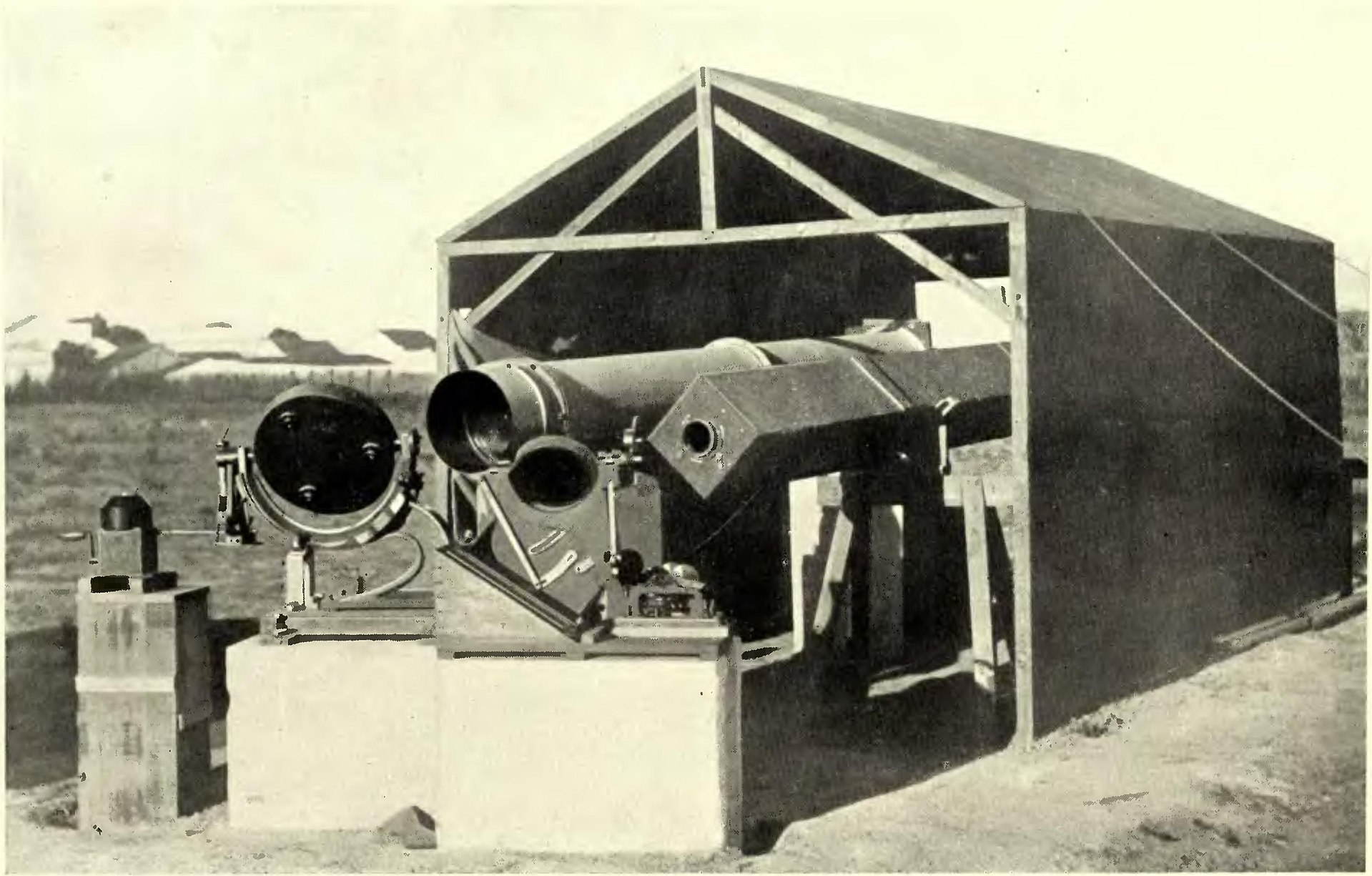 Equipment used in the 1919 solar eclipse expeditions, stretching the definition of “portable” telescopes…

In 2017, many normally-quiet corners of the United States found themselves overrun with astronomy enthusiasts as they crammed themselves, their cars, and their cameras into the path of the solar eclipse. Still, a traffic jam in Wyoming isn’t quite as rough as what Eddington’s 1919 trip entailed. More than two months before the May 29 eclipse he sailed from England to Príncipe Island (off the coast of western Africa), toting a huge telescope borrowed from an observatory in Oxford and a slew of fragile glass photographic plates that could be used to record the observations. The equipment was set up and ready weeks ahead of time, and the team held its breath on the day of the eclipse as torrential rain and thick clouds blocked out the sky all morning. Luckily, just before the eclipse the skies cleared and Eddington was able to take a few precious photographs that confirmed Einstein’s theories.

Not everyone gets this lucky when studying eclipses – wonky equipment or badly-timed clouds can be all it takes to stymie our observations, and when you’ve traveled for months in the hopes of a few minutes of data this can be frustrating to say the least. Eighteenth-century French astronomer Guillaume Le Gentil is infamous for what may be the most epic failure in the history of eclipse observing. He set out for Pondicherry, India to observe the 1761 transit of Venus (where the planet passes in front of the Sun) and ran into problems almost immediately. War between France and Britain broke out mid-trip, and with Pondicherry captured by the British the French crew of Le Gentil’s ship decided to bail on India and dock in Mauritius, off the east coast of Madagascar. Le Gentil gamely attempted to observe the transit from the bucking deck of the ship, but his results were useless.

Venus transits are extremely rare, but they also happen in pairs. Each pair of transits occurs less than one every hundred years, but the two transits in each pair are separated by only eight years and the 1761 event was the first in its pair. Knowing he’d get one more shot in 1769, Le Gentil decided to simply hang out in the Indian Ocean for eight years and take another crack at Venus during the next transit. This time around things started better: by 1768 Pondicherry was back under French control and welcomed Le Gentil enthusiastically, and he spent more than a year painstakingly setting up an observatory. The next transit was due on June 4, 1769…which dawned stormy, with thick clouds blanketing the Sun for the entire duration of Venus’s trip across the face of the Sun (and clearing immediately afterward) and officially making Le Gentil the record-holder for “worst business trip ever”.

Venus transiting the Sun, or as Le Gentil referred to it, “nooooooo…” Credit: NASA

Depressed and ill, Le Gentil dragged himself home to France to discover that he should have probably updated his Facebook status sent a letter sometime in the intervening eleven years. Knowing only that he’d shipped off to India and never returned, his friends and family back in France had since decisively moved on – he’d been declared legally dead, his wife had remarried, his heirs were bickering over his estate, and he’d been booted out of the French Academy of Sciences (which had sent him on the trip in the first place).

Airplanes and cell phones make these adventures a bit easier, but scientists still have to travel all over the planet to put themselves in the paths of eclipses. Solar astronomer Shadia Habbal has battled sandstorms in Kenya, snowstorms in Mongolia, and polar bears in northern Norway during her expeditions to observe solar eclipses. Other astronomers have ridden flying telescopes into the shadow of Pluto, snagged successful asteroid data in Argentina thanks to local big rig drivers circling their trucks to shield the portable telescopes from roaring winds, and even gotten kidnapped by bandits mid-expedition. All of these adventures are undertaken in the hopes of capturing data from eclipses that last only a few minutes at most. The events may be short, but the data we get from each one can be precious and, in a case like Eddington and Einstein’s, groundbreaking. The science is unarguably worth the hassle…as long as observers send their friends and family the occasional text to let everyone know they’re still alive.

I have a whirlwind pair of trips coming up at the end of the month, so my next update will be coming to you from France! First I’ll be heading to Paris and then Lyon for a research conference. After that I head straight to the other side of the planet and Christchurch, New Zealand for my biggest astronomy adventure yet – stay tuned for more news on this in a couple weeks! In the meantime I’ll also be speaking at the next meeting of Rose City Astronomers in Portland, Oregon on June 17th!

Outside of my travel preparations I’ve mainly been busy writing for the past couple weeks, but folks looking for more content from The Last Stargazers can now subscribe to the book’s new Instagram, where I’ll be posting photos from various observatory visits and writing adventures!

You can also read past newsletters on the book’s website and follow me on my Goodreads and Amazon author pages.